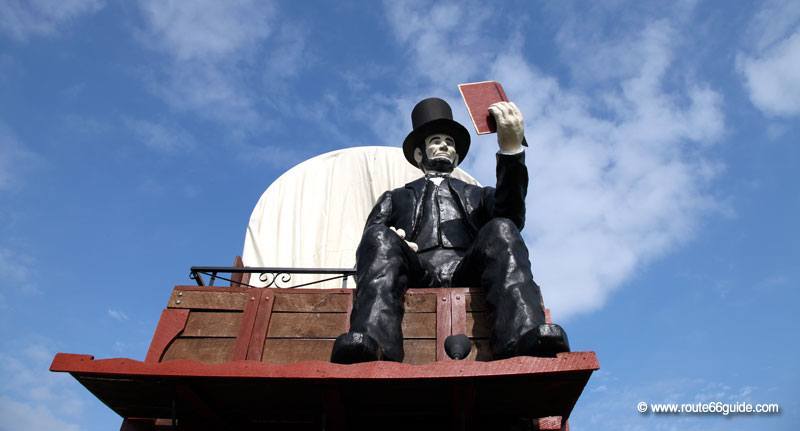 In the nineteenth century, no road traversed the entire United States in any direction. There were certainly a few tracks, precariously maintained by Indians or pioneers, but it was virtually impossible to connect both coasts. The attacks of Indians and bandits, as well as the extreme weather conditions made the transcontinental trip an arduous and lengthy -over a year- effort. Thus, many Americans preferred navigating around the peninsula via Cape Horn to avoid this challenging land-crossing adventure. 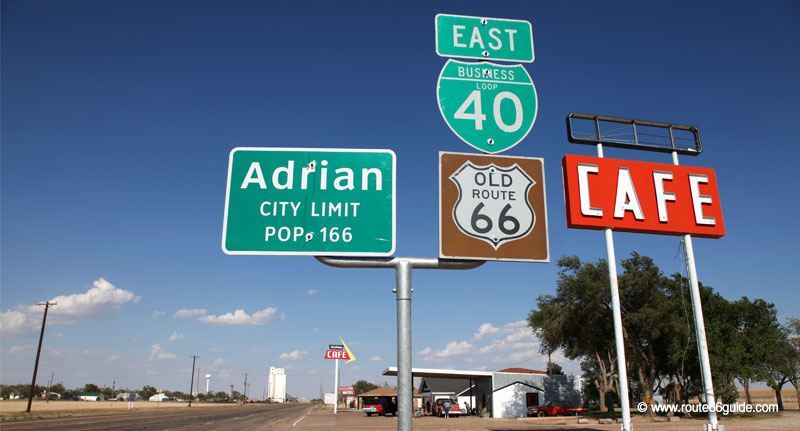 Above: Adrian, Texas. Today, the historic Route is marked as a tourist attraction (brown sign) in addition to official signs. In the background, the Midpoint Cafe, located exactly on the midpoint of Route 66, precisely at 1,139 miles from Chicago and Los Angeles.

The heyday of the railway

Democratization of the Automobile

At the same time, Henry Ford created a car that will make its glory, the Ford Model T, launched in 1908 and poised to sell over 15 million units around the world.

Ford democratizes the Automobile and opens the way for mass private transport. The country, however, lacks a real road network. The few existing routes end in a cul-de-sac on the edge of the desert or mountains. In the Mojave Desert, motorists find their way following electricity poles.

In 1916, President Wilson drafts the foundations of a true national transportation policy. The Federal Highway Act draws the first line of an interstate road. It includes the creation of the first transcontinental highway in the world, crossing eight states and opening up the thriving Chicago.

The colossal project is entrusted to a contractor in Tulsa Oklahoma, Cyrus Avery, in his capacity as president of the Associated Highways Association of America, who does not hesitate to divert the transcontinental route so that it traverses his Oklahoma home state .. .blatantly off the direct route between Chicago and Los Angeles!

The draft project for the future Route 66 was endorsed in 1925 and the route was officially born in 1926. To keep the costs of the numerous civil engineering projects under control, the Route followed the existing railway track.

In 1926, as the Interstate Highway System began to develop the first grid road numbering, it consisted in an ascending order from west to east and from north to south, where odd roads run north-south and even ones run east-west.

Thus, Route 66 should have been called “Route 60" had the number been available. Indeed, it was taken by a road through the states of Kentucky and Virginia. Cyrus Avery flirted with "Route 62" for a while but finally decided for "66" as it rang better, with its double "6". 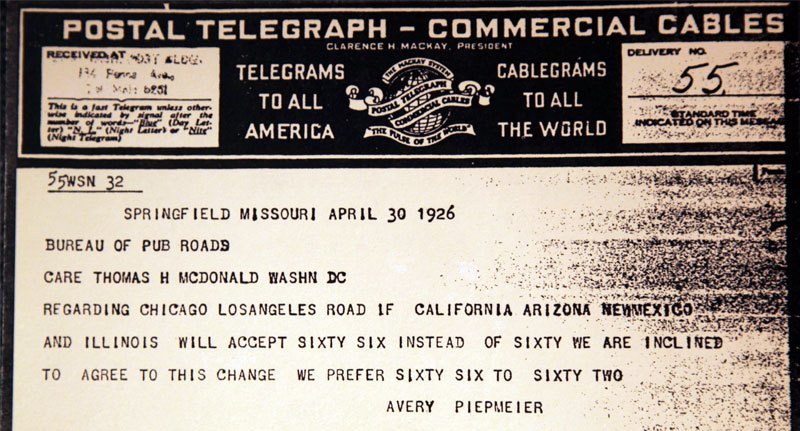 Above: Copy of the telegram of April 30, 1926 definitely endorsing number "66" for the future transcontinental route. As number "60" was unavailable, "66" to "62" were favored as specified in this document on display at the "Route 66 State Park Visitor Center, Missouri Department of Natural Resources" in Eureka, Missouri, with the signature of Cyrus Avery, the "Father of Route 66".

From dirt roads to asphalt

At its outset, only a third of Route 66 was paved, mainly in the north-east. Between Texas and California, only 60 miles were actually paved while the rest remained unpaved, dirt roads. Some of the latter became sadly legendary as the "Jericho Gap" in Texas, which turned into a mud slide as rain poured.

The Great Depression of 1929 hinders the construction progress, while thousands of poor workers are engulfed by the colossal project hoping for a better life in the west - as perfectly depicted by Steinbeck in "The Grapes of Wrath".

It was not until 1938 that Route 66 was completely covered with asphalt or macadam. Over twelve years of work! Some villages and cities that have developed around the railway, are connected for the first time through a road network. Their economic growth will be rampant.

After the Second World War, the Americans discover recreation, vacation, and purchasing power. Growth explodes, businesses run at full speed, birth rates reach record highs, the generation of "baby boomers" is still in short pants and will permanently change the face of the 66 ... for which the "Great Adventure" thus begins.

The new Route 66 unfolds its now comfortable 2,448 miles from the Great Lakes in the north-east of the country, bordering Canada to the Pacific Ocean on the west coast of the United States.

Aptly called the "Main Street of USA", it meanders through the downtowns of hundreds of communities on its path, creating a tremendous economic craze. Never had the United States know so many gas stations and oil companies. Motels, diners, drive-ins, and attractions spring up on the edges of the road at an amazing rate. 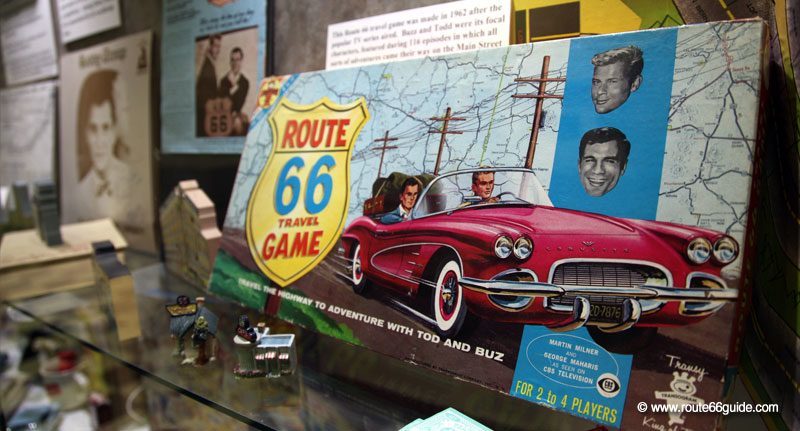 Above: In the heyday of the automobile, Route 66 is so legendary that it inspires "Route 66 Travel game" to browse the mythical route without leaving home. It is exposed in the Route 66 Museum in Lebanon, Missouri.

The trip, which was previously an arduous effort, becomes a joyful stretch with the onset of paid leave. The road is now part of the holidays themselves, which are suddenly filled with numerous attractions among the most popular of America; the Grand Canyon - maybe the most remarkable - but also the gigantic meteorite crater in Meteor City, Painted Desert around Grand Canyon, Meramec Caverns, etc.

Some cities that did not exist or were of minor entity at the time became important urban settlements with the passage of Route 66. This was particularly the case of Amarillo in Texas, Albuquerque in New Mexico, and Flagstaff and Kingman in Arizona. 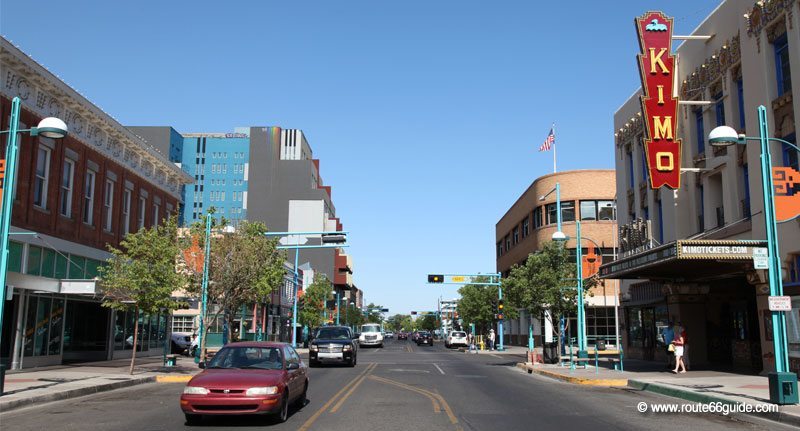 Above: Albuquerque, New Mexico and its contemporary downtown arranged around the KiMo Theatre, with its unique "Pueblo Deco" style. Like many other villages, Albuquerque developed thanks to the passage of Route 66 through its downtown area - as shown here in the center of the image.

Route 66, the first paved, transcontinental road in the world, will remain the only highway of this nature in America for sixty years, opening the doors of the West to endless dreams, hopes and disappointments.